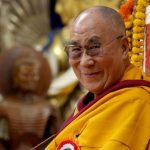 On my first visit to India, after attending teachings by H.E Tai Situpa, I decided to go to McLeod Ganj where H.H. Dalai Lama was giving all-day transmissions at his monastery. Anyone who has visited this monastery will know that approaching and entering it is not straightforward for a first-timer.

I arrived when the teachings were already in progress. Loudspeakers were placed all around so I could hear H.H. Dalai Lama speaking but couldn’t see where he was sitting. Walking up one ramp revealed a sea of monks filling up one level but H.H. was not there, so I searched further. After walking around some more, and not finding the source of the voice on the loudspeakers, I sat down on some stairs where a group of Tibetan laypeople had gathered. 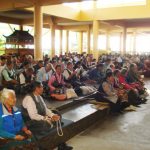 The surface was concrete and cold. An old Tibetan man who was sitting on cardboard got up and tore a piece of his cardboard seat off and handed it to me with a smile. A much-appreciated barrier between cold cement and bony bum.

As the teachings progressed, every now and then a member of the Tibetan group would get up and walk up the stairs and look over a sidewall. After some time viewing this ritual I plucked up enough courage to do the same. Going up the enclosed stairs and looking over the side, I looked straight into the face of H.H. 17th Karmapa, and sitting with his side to me was H.H. Dalai. I finally found the source of the voice on the loudspeakers.

Contemplating this situation, I thought about the Dharma. For it to flourish there needs to be an atmosphere of kindness and compassion like the old man giving me half his seat. Being lost and not knowing where to go, we need teachers to show us the way, like the Tibetans walking up the steps. And finally seeing H.H. Karmapa and H.H. Dalai Lama, we need good examples of Dharma holders to inspire us.